We got two very important housing reports last week and both showed some real strength in our housing market. The National Association of Realtor’s Existing Home Sales Report for September showed a small decrease in sales but that was only due to the fact that there are no houses to buy. Inventory remains near an all time low. 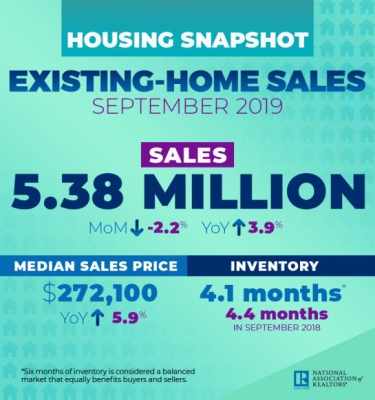 But the report did show that owning real estate has really been a great investment as the median sales price increased to $272,100 which is a 5.9% increase over the past 12 months and marks the 91st straight month of home price increases.

Total housing inventory at the end of September sat at 1.83 million units, approximately equal to the amount of existing-homes available for sale in August. Unsold inventory is at a 4.1-month supply at the current sales pace, down from the 4.4-month figure recorded in September 2018.

First-time buyers were responsible for 33% of sales in September, up from 31% in August.

In a separate report, the Census Bureau’s New Home Sales report for September showed that the median sales price of new houses sold in September 2019 increased to 299,400.The average sales price was $362,700.  Sales increased to an annualized pace of 701K units which is a gain of 1.6%.

What Happened to Rates Last Week?

Overview: Mortgage backed securities (which directly controls mortgage rates) moved in a very narrow range and were squeezed sideways for the week. The economic news was not that great which would normally have helped rates out but positive momentum on Trade and Brexit kept rates in check.

Taking it to the House: The September New Home Sales matched market expectations at 701K. matched market expectations at 701K. The August FHFA Housing Price Index showed a MOM gain of0.2%  vs est of 0.4%. Weekly Mortgage Applications fell by -11.9%. Refinance Applications tanked by -17.0% and Purchase Applications pulled back by -4.0%. Existing Home Sales for September came in at 5.38M vs est of 5.45M. Even though mortgage rates have been incredibly low, the culprit is lack of inventory as prices keeping moving higher as the Median Sales Price is up 5.9% YOY to $256,900.  Unsold inventory is only at a 4 month supply and properties remained on the market for only 32 days.

Durable Goods: The Headline September Durable Goods Orders were much weaker than expected (-1.1% vs est of -0.8%), when you strip out Transportation, it was also a miss but less pronounced (-0.3% vs est of -0.2%).

What to Watch Out For This Week:

The above are the major economic reports that will hit the market this week. They each have the ability to affect the pricing of Mortgage Backed Securities and therefore, interest rates for Government and Conventional mortgages. I will be watching these reports closely for you and let you know if there are any big surprises.

It is virtually impossible for you to keep track of what is going on with the economy and other events that can impact the housing and mortgage markets. Just leave it to me, I monitor the live trading of Mortgage Backed Securities which are the only thing government and conventional mortgage rates are based upon.